Germany
More
< Back to main filter
< Back to news
Home >> Latest news >> Humans need not apply: robots are taking over airports

Humans need not apply: robots are taking over airports 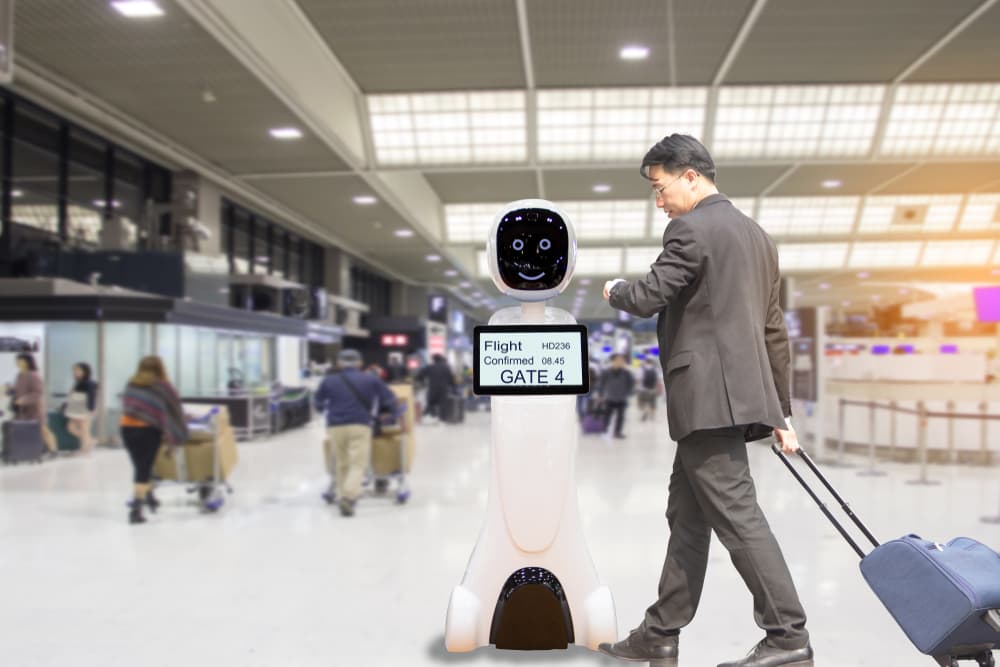 Just a decade back a fully automated airport with no staff seemed something out of a science fiction movie. Today it is a reality. From Glasgow Airport’s trial with GLAdys, Shenzhen Airport’s operating security robot Anbot to the fully automated Changi’s Terminal 4 − the industry seems to be moving towards a completely seamless experience for passengers. Starting with biometrics and ending with customer service robots, what does the airport of the future look like and do humans need not apply?
Self-service to meet the increasing passenger capacity

Air travel demand is set to double in the next two decades to a staggering 8.2 billion passengers in 2037, according to the latest report by International Air Transport Association (IATA). While the forecast undoubtedly suggests economic growth for the air transport industry, the increase also poses serious challenges. Fast growth means air travel infrastructure - especially airports - is coming under increasing strain to meet the demand, pushing the industry to innovate in order to cut delays and increase efficiency. This is where self-service comes in.
To meet the capacity in the past decade airports have been implementing self-service with great success. According to a recent study, thanks to self-service kiosks, passengers waiting times have been reduced approximately by 30%.

From self-check-ins, baggage drop offs to functioning as information desks, the self-service kiosks shorten waiting times for customers and reduce the need for ticket agents. That, in the long run, not only cuts down costs but also leaves the staff to focus on more complex tasks.
Biometrics bringing passengers closer to seamless experience

Biometric technology is at the top of the list of the upcoming industry game-changers that bring passengers closer to seamless airport walkthrough. For instance, technology like in-motion biometrics can identify moving travelers without them ever stopping for ID checks. Boarding a plane by using a passenger’s biometric data only requires a fingerprint rather than a passport and a boarding pass.

Smooth air travel is closer than you think. Delta passengers can now opt to use their fingerprints to enter a plane. Lufthansa Group announced the launch of biometric boarding across the U.S. airports after successful trials at LAX that saw approximately 350 passengers boarding in 20 minutes. Beijing’s new airport, which has an estimated capacity to handle nearly 100 million passengers annually, is also set to feature the latest facial recognition technology.

These few airlines and airports are far from being the only ones investing in this technology. According to airport and airline tech company SITA, currently 77% of airports and 71% of airlines are investing in biometric ID projects.
No more human staff? Customer service robots to handle passenger inquiries

While automation of mundane tasks seems inevitable, what about the more complex functions such as customer inquiries? Can robots replace people when it comes to more sophisticated assignments like listening to and then giving directions to a lost passenger?
It appears so. Numerous airports worldwide have been testing customer service robots with various abilities. In 2016, Glasgow airport introduced UK’s first humanoid robot GLAdys tasked with entertaining passengers by singing and dancing Christmas songs. The intention was to explore how customer engagement can be enhanced through digital technology. California’s San José International Airport also used robots to provide entertainment and give directions in 5 languages to shopping and dining areas.

Amsterdam Airport Schiphol trialed a robot designed for even more tasks.  The robot, called Spencer, had the task of scanning travelers’ boarding passes and directing them to the designated gates. Spencer automatically adjusted its speed to that of a group, avoided obstacles and informed passengers of the remaining distance to their departure gate.

Arguably most impressive of these is an already operational security robot Anbot. Stationed at Shenzhen Bao'an Airport, Anbot is assigned to carry out security checks at airports’ Terminal 3. It has facial recognition and is equipped with electrically charged riot control tool that can be activated by an officer in a control room. Today, Anbot is the closest thing to a real life RoboCop.

While this technology seems to benefit customers and airports, the speed at which it is evolving and being implemented also raise concerns. Biometric security has caused some apprehension over privacy. Technology of autonomous vehicles naturally bears the question of who is responsible if it injures a person. Whether it is a security robot or a driverless vehicle, the ultimate question is who takes the blame for its malfunction and how to avoid it?

Despite concerns, one thing is clear – the new technology is here to stay. To meet the upsurge of travelers around the globe tech innovation appears to be the only way forward. Yet while the benefits of modernization are clear, concerns should also be addressed. The more in-depth trends, innovations and questions will be tackled at AIR Convention 2019 Air Tech conference streams in Vilnius, Lithuania and Bangkok, Thailand. Visit here to learn more about the international aviation conference https://www.airconvention.com/.